This page contains member-supported content and the full articles are only visible to Blue Bottle Insiders. If you are a member, please log in here. You can become an insider by purchasing a membership here:

As mentioned in the Color Mixing Challenge, to get the brightest, purest color mixes (that you can then tone, tint, or shade however you want), you’ll need primary colors. Primary colors are ones that don’t contain any other color. They’re a single hue. As we’ve found, the primary colors for mixing colors are Cyan, Magenta, and Yellow (just like printer ink). Now in the real world, there aren’t always “true” primaries. Clay colors aren’t always, visually, a pure primary. They might lean toward another color, or they’ll have white or black included (which means the color will never be fully intense/saturated). Also, the base materials of polymer clay, itself, might have a color that shifts the hue. The Premo Primaries Colorist Maggie Maggio has done a lot of work with the various brands of polymer clay, trying to find “true mixing primaries”. She’s found that three colors of Premo make a good, true-color mixing primary triad that approximates the CMY mixing paradigm. In Premo, look for Cobalt Blue Hue, Fuchsia, and Zinc Yellow Hue. Those are going to be the most primary of their colors and work pretty well in color mixing all the other colors. You’ll notice that the blues on this page aren’t very “cyan” looking. They don’t look like Windex. But that’s because they’re fully saturated. You’re used to seeing cyan in printer ink on a page of white paper. Imagine that same hue more concentrated and you’ll get the nice medium blue you see above. But 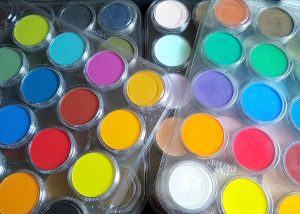 We’ve already learned about using pastels with polymer clay, then we explored the types of pastels there are out there. Now I want to give you some more info about one specific brand of artist’s quality pastels, PanPastels. While you can still have phenomenal results with regular student quality pastel sets, polymer artists often want to invest in PanPastels. So here’s more info about them, helping you buy them with a better understanding. Remember, pastels are a general type of art material, but PanPastels are a brand name for a specific pastel product by the ColorFin company. Why PanPastels? If all artist quality pastels are good enough, why would I want to splurge on PanPastels? Because they’re SO easy to use for our purposes. Polymer artists don’t apply sticks of pastels to a rough surface the way that pastel painters do. We’re applying powdered pastels to our unbaked polymer clay, usually using a brush or sometimes a sponge or finger. PanPastels come in a flat pan, just like blush or eye shadow, that load onto a brush in just the same way. The pan is also quite soft. That makes it super easy to load a lot of pigment onto the surface of the clay with ease. I have to admit that I tend to avoid trends and I dismissed the popularity of PanPastels as a cult craze. But you know what? Using PanPastels changed my entire polymer clay experience. It was a total game-changer. I’ve never been much for 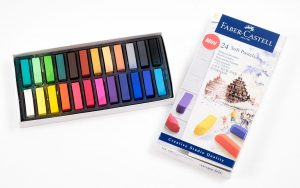 A Focus on Pastel Quality

Pastels are an artist’s and crafter’s material that is incredibly useful and versatile for use with polymer clay. I discussed them first in this article, so make sure to read that one first. But I wanted to give you an idea of the types of pastels out there and which ones you should buy. Artist’s vs Student Quality Historically, artists have created their paints using a single pure pigment and a carrier such as linseed oil for oil paints or gum arabic for watercolors. (Pigments are particles of pure coloring material. You can learn about them here.) Because artists need to have consistency with their materials, each color of paint (or pastel) contains a single pigment. You’ll recognize the names of the pigments on the paints, with words such as yellow ochre, viridian green, phthalocyanine blue, etc. Some pigments are natural and some are lab-created. High-quality artists paints contain high “pigment load” without fillers or other extenders. They’re essentially pure pigment with just enough carrier added to allow you to use and apply the paint. Pigments are expensive, so artist’s quality paints are quite expensive. While you can buy them in sets, they’re also sold individually. Yes, you can buy one single stick of cobalt blue pastel! When someone is just learning to create, however, there’s no need to use expensive art materials. That’s where “student quality” paints come into play. This tier of paints (and pastels) use fillers and extenders so there’s not as much density of pigment. Student 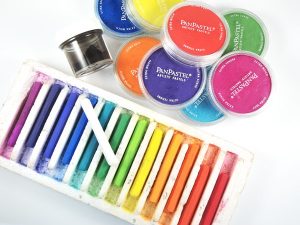 Working with Pastels and Polymer Clay

Pastels are commonly used with polymer clay, and for good reason. They’re very versatile, and we can use them in many ways with our polymer clay work. Here is summary of what pastels are and how they can be used with polymer clay. This article is part of the Discovery Challenge #2 in the Community. What are Pastels? If you apply pigments to the surface of a canvas, they will easily be washed or brushed off. So artists use various binders to create paint that will stick better to the surface. Oil paints use linseed oil. Watercolors use gum arabic. Acrylic paints use acrylic medium. Tempera (originally) used egg yolk. But there’s another type of painting that doesn’t use a binder to adhere the pigment. Pastel painting relies on the “tooth” of the paper to hold the pigment that’s applied. The paper fibers, themselves, hold the pigment particles. When the pastel painting is finished, a fixative is typically sprayed on to fix the pigment in place. Because of the way pastels are applied to paper and fixed later, the pastels are very nearly pure pigment. They contain just enough extra ingredients so they can be pressed into a stick, similar to chalk. These pastel sticks are what artists hold, like a pencil, when they apply the colors to the paper. Oil Pastels vs Soft Pastels There are two types of pastels, oil pastels and soft pastels. Oil pastels have an oily base, similar to lipstick but less creamy, and aren’t 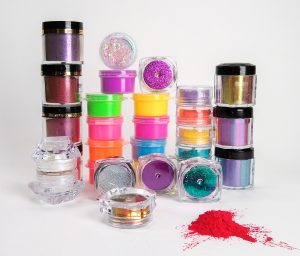 In recent years, nail art has become quite a trend. Not only do people go to special salons to have creative nail decorations applied, they also buy the materials to create these colorful treatments at home, themselves. These days any color is available and it goes far beyond simple nail polish. There are resins, acrylics, tips and stick-on nails. You’ll find stickers, decals, and crystals. There are stamps and brushes and fancy templates. With some creative repurposing, we can use all of these materials in our polymer clay art, of course. But there’s one trend that’s particularly fun to use with polymer clay… nail powders. What are Nail Powders? Nail powders are powdered pigments, mica, or other powders/particles that are applied to slightly tacky/sticky nail polish to make a colored layer. You can use either regular nail polish or gel polish to create this effect. The general process is shown in this video using chrome, holo, and mermaid powders, but there are many types of nail powders (see below), each with its own effect. While I love a nice manicure as much as the next girl, that’s not what this article is about. You see, you can apply these powders to any slightly sticky/tacky surface. Such as…yes…unbaked polymer clay. Yes, nail powders can ALL be used to great effect with polymer clay. This is a whole new world of fun. So let’s get busy exploring. I’ll describe the various types of nail powder below and then we will explore them 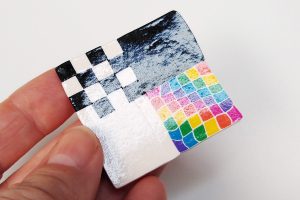 A Spray Varnish that Works! 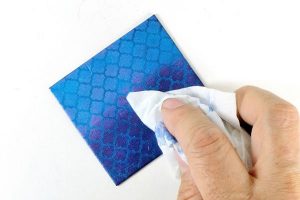 Mica powders can’t be layered, and they don’t necessarily need to be sealed. What? What is this madness? Yes, there’s more to the story. Same goes for pigment powders. 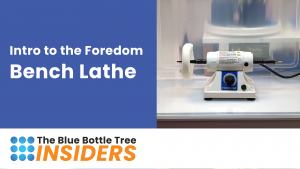 In one of our Studio Drop-In sessions recently, we talked about things that were game-changers that we waited too long to buy. This was mine. I should have bought this long ago. Buffing polymer clay to a high gloss can certainly be accomplished by using a Dremel. But it’s hard on your hands to hold the Dremel and the small wheel diameter means that it’s all too easy to gouge or burn the surface that you worked so hard to sand perfectly smooth. If you’re doing a lot of buffing, or you just want to invest in quality tools, this one is worth it. Meet the Foredom Bench Lathe. From what I can tell, there’s only one model of the Foredom Bench Lathe. Different listings only differ with the types of accessories that are included. Here’s the listing that I bought over on Amazon. Oops, it looks like the price went up a bit since I bought mine. Still a bargain, though. You can also order directly from Foredom. You can attach lots of things to this bench lathe. With the spindles, you can use felt or floppy muslin wheels. There are also attachments to allow you to attach a grinding stone wheel or flap wheel. The chuck fittings allow you to use tools with a 1/4″ fitting (like your drill uses). Or you can use the fitting that allows you to use collets and Dremel accessories. If you like the idea of using a Dremel, you can also use 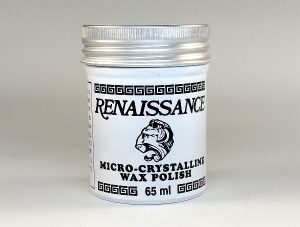 What is Renaissance wax and how can you use it with polymer clay? 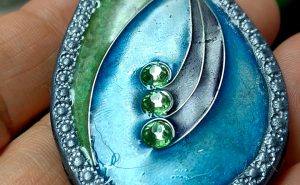 Have you ever had this oily coating show up months later on your pieces that were coated with Kato Liquid Polyclay as a clearcoat? I’d love to know more about your experience.

Help with Your Order

Love what you do.