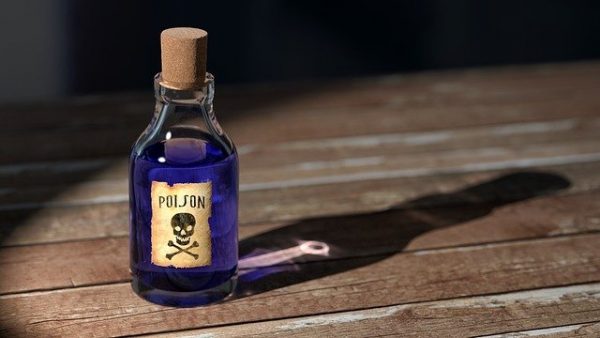 Some of this doesn’t have anything to do with polymer clay, but I’m sharing it because we so often encounter people assuming that polymer clay is toxic. Warnings and fear-mongering start to crop up and then myths get repeated. So here’s a little bit of clarity, beyond the original post that has been on my website for years.

The first dictionary definition says that toxic is “poisonous.” The second definition is “very harmful or unpleasant in a pervasive or insidious way.” I think we all know these definitions. Who hasn’t joked that a baby’s diaper holds toxic waste, or that a relationship is toxic? Toxic clearly means that something is bad for us and should be avoided.

We all know that bleach is toxic. But we bleach our clothes, right? And adding a few drops of bleach to unsafe water can make it drinkable. Vitamins are absolutely necessary for us to survive, but if you take too much you can become quite ill. So there’s obviously a lot more to the subject than merely being toxic vs non-toxic. Can something be BOTH? Toxic and non-toxic? Of course!

The quality of something being toxic (or not) is dose-dependent. That just means…it depends on how much you ingest. You’re already familiar with this. Ethanol is toxic. But we all know that drinking an ounce of ethanol is a lovely evening and a liter of ethanol is a trip to the morgue. Two Tylenol (paracetamol) relieves a headache, but a handful means you’re getting your stomach pumped.

If you rub salt on your skin, it will scrub off your rough calluses. But if you dissolve the same amount of salt in water and swallow it, your body won’t be nearly so happy. Sunscreen is safe for your skin, but you wouldn’t want to butter your toast with it. You get the idea. Some things are toxic in one situation, but not in another. This often depends on the mode of action, in other words, how it affects a body system. Neurotoxins won’t have much effect on the growth of your hair, for example.

This also comes into play when something toxic is made inert by a process, such as curing. An example would be heavy metals in ceramic glazes that are toxic in raw form but perfectly safe after firing.

Iron oxide (rust) is a commonly used pigment that is completely harmless when we use it in paint but can cause problems when inhaled in occupational environments.

Before a scientist can determine if a material is toxic or not, they need to define the situation and the dose. So when evaluating the safety of polymer clay, they looked at how a person would typically use the material and how much of it would be absorbed through the skin and how much would be ingested accidentally in typical use. They also looked at what would be emitted during baking cycles. And when polymer clay is used properly and typically as a craft material, the body doesn’t absorb levels of any of the clay’s components in levels high enough to reach toxic levels. This means that you can craft with polymer clay and not worry that it will poison you, under normal and typical conditions.

This doesn’t mean that it’s safe to feed it to your children, plug leaks in your dishwasher, use it as a face cream, burn to heat your home, etc. Of course, that’s a given. Nobody would do that! (One would hope.) Something can only be determined to be non-toxic (I’m talking scientific determination) when it’s given strict parameters. That’s the way science works.

Even if this info isn’t made public, it the protocols and procedures were carried out. Nobody just wakes up one morning and says, “Oh yeah, btw, polymer clay…looks good to me!” Have you ever read the Duke University toxicology report? This is from 2000, so it’s pre-phthalate removal. But it goes into more detail about testing polymer clay’s safety. Here’s a bit more in a statement from the Art and Creative Materials Institute. Keep in mind that the components of polymer clay are well-known and well tested individually, so there’s no need to do specific testing of the toxicity of polymer clay, itself. They only need to monitor for the release of the components during use. (Be aware that a different plasticizer is used now. More on this below.)

While we’re at it, let’s talk about a Material Safety Data Sheet (MSDS). They have different names in other countries. That is a sheet of technical data that explains the safety precautions that employers and safety personnel need to take when using, storing, cleaning up, and disposing of certain chemicals and materials. When I used to work in a lab, we had a large book with all the MSDS pages so the data was in one place. This is important if, for example, a spill happens or there’s a fire. Authorities need to know what chemicals are present so they can handle the materials safely. It is not the same thing as toxicology testing. But it does give you an idea of the occupational hazards that material might present.

I’m bringing all this up so that we can stop being afraid of baking clay in our home oven or drinking coffee and eating snacks while we work. Polymer clay isn’t poison. There’s no need for ominous warnings to avoid the lip area on mugs. It’s safe to wear against our skin. If you use it as an ashtray, your biggest danger is not toxic fumes (dose matters!), but that it will get destroyed. It’s not a dangerous material!

But the dose matters and the situation matters. If you’re using it far outside the bounds of what the toxicologists have tested, you might be incurring risk. If you’re working with it day after day after day, such as in a small factory, going through hundreds of pounds a week of the stuff, you will have greater exposure. That is occupational exposure and you should probably talk to the manufacturer for more info. Don’t assume that no safety procedures are ever needed just because it’s been deemed to be safe for hobbyists to use as a craft material.

Use good ventilation if you’re baking often. If you’re in production, get a ventilation fan. Honestly, you’d do the same if you baked bread, right? (I used to live near a bakery. Oh…my…they definitely vent the ovens outdoors!)

Help with Your Order

Love what you do.